With Cataclysm coming I wanted to take some time and think about my most memorable moments in wrath. Well considering I first started playing WoW at the end of October 2008 99% of my playtime has been during Wrath, despite that... I want to recollect on the things that will stick in my mind of the time “before the cata hit” 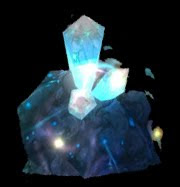 Everyone who had read the patch notes knew exactly what was going to happen. The ability to prospect Titanium was a huge thing! ZOMG epic gems! I remember back then I would spend hours upon hours farming for titanium and maybe be lucky to get half a stack a night. The air in Icrecrown was filled with players on their flying mounts hopeing to be the first one to see titanium node pop up.


At the time my guild was a close net group and many of use would curse at each other when our gatherer notes wold pop up with finds of Titanium multiple times in a row – sadly this was never me. I can recollect my most common phrase then was “Damn you Merb!” (Merberan , A holy Paladin who rolled so well that when we wanted to win something people joked about rolling with ./merbroll and you would get an instant win, he also was very lucky with finding these nodes!)


Nearing the end I was desperate to get my hands on Titanium before the patch I decided to go the fast, easy and sadly expensive way . The Auction House. I would by any stack that was below 250G (Which wasn’t a whole lot). Once 3.2 hit I believe that I had about 35 full stacks to prospect... (1/2 of what the evil pally had sadly)

Just thinking about this with my first 80 still gives me shivers, It wasn’t just the DAYS of rep

farming it was that at the time I played on a PvP server. So during my drudgery of doing these quests that were cool the first week it was also guaranteed that I wouldn’t make it out alive from the cave while hunting for Viscous Oil.

I would also like to note that it took me about two weeks to realize that I could save gold by doing “Thrusting Hodir’s Spear” naked. Man! the amount of gold I would have saved would have been nice to have once I had to rep to buy the silly shoulder enchants. 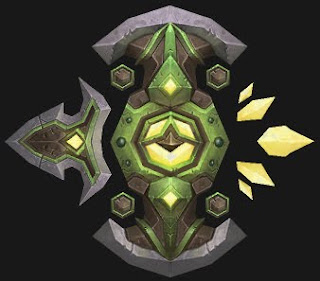 The Vigilant Ward, it took our guild two months for it to drop off Anub'arak. Thankfully! For the first time ever while raiding in this guild I won a roll over the Merb-roller (see above). Little did I know this also meant that I would never ever get a new shield. I still have it now! Not because I like it but because nothing EVER drops. When I have the time I still do ToC 25 in desperate hopes 1) a pug can beat the faction champs, 2) The upgrade drops, and 3) that I could get a roll high enough to win it. (Still has yet to happen)

The day Cata hits I have made a bet with a friend that I the first quest I do will be a shield upgrade – to which I miiiiight /nerdrage .


The Undying day that Sath died.

Yeah.. I know look at that date, sure we were uber geared for Sath 10 3D and Naxx 10 but still! Even at this point if you have the gear it doesn’t make a player who knows and follows tacts enough to not die. The best part of this run was the friendships that were formed as we truly did bond that night. (oh and I got the drake! Channeled ./merbroll and it so worked!)

Something that solidified the night for me was the letter that we got from the Raid Leader the following day, as we decided to shard all of the loot and divide it up among the group. 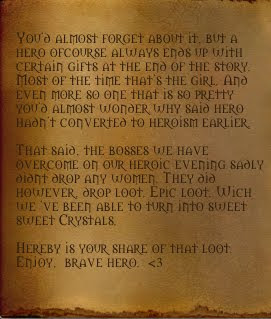 “You almost forgot about it. But a hero ofcourse always ends up with certain gifts at the end of the story. Most of the time that’s the girl, and even more so one that is so pretty you’d almost wonder why said hero hadn’t converted to heroism earlier.

That said, the bosses we have overcome on our heroic evening sadly didn’t drop any women. They did however, drop loot, Epic loot. Which we have been able to turn into sweet sweet crystals.

Hereby is your share of the loot
Enjoy , Brave Hero <3”

Now despite the fact that I am a woman, and that I am not attracted to them at all.. I enjoyed this note and still hold onto it safely in my bank.


And for now, I believe that this is where I call my recollection on Wrath to a close for the evening. If anyone would like to comment please feel free.
Posted by Calmly at 9:10 PM 1 comment:

My first time! - Be gentle

My persona is Meli, and I am a World of Warcraft player.

I proudly say this and ignore the stigma because I love this game. It is true that it’s hard not to get consumed by it especially like me who at one point was raiding ICC 10/25, VoA 10/25, Toc 10/25 and the Weekly on more than one toon not because I had a need to but because I wanted to. However since moving from home to the coast and going to art school I have cut my playing to 8 hours a week (on a good week).

I have four level 80 characters (Shaman, Paladin, Druid, and Warlock) plus two more on the way (Hunter 77 and Priest 68). Aside from raiding it is obvious that I am an alt-o-holic on top of that I also am a prof-o-holic. When it comes to a game so vast as WoW it’s hard to limit myself to just one thing. I want to experience everything. I like to see the different sides of the game dynamic and how it affects us as players.

I am currently a full time Student at an art school studying Game Art & Design, My big dream is to work for Blizz obviously, but being Canadian makes that dream practically impossible to achieve.

In the future this blog will mostly be about World of Warcraft from a healer’s perspective. I hopefully will keep this blog up but like most new bloggers we are all gun-hoe in the beginning and fizzle out in about a month.

I have a love for this game and want to get involved with the community surrounding it.

Calmly
Full time Video Game Art & Design Student at the Art Institute of Vancouver (Grad in 6 months woohoo!) When I am not doing my massive amounts of homework people can normally find me on my main. A resto Shaman on Alliance side Ner’Zhul US. I am an addon junkie, lorewhore, lowbie leveling master, love the auction house and of course raiding! All in all I love the game, I love the people who I play with, and I love being a nerd.